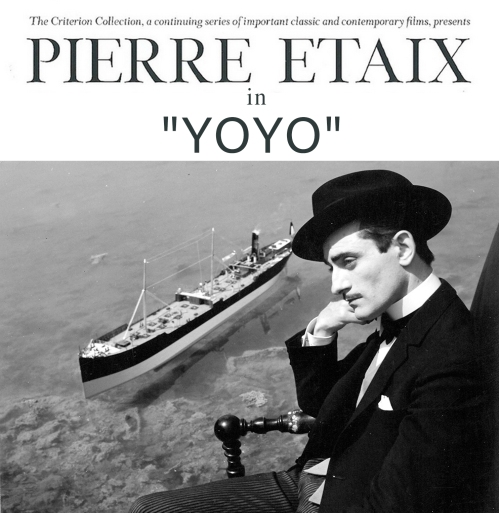 Yo Yo is a 1965 French comedy film by Pierre Étaix. The story follows the son of a millionaire from the 1920s to the 1960s. After losing his fortune in the stock-exchange crash, he teams up with an equestrienne and becomes a circus clown.

This elaborately conceived and brilliantly mounted comedy is Pierre Etaix’s most beloved movie, as well as his personal favorite. Beginning as a clever homage to silent film, complete with intertitles, Yoyo blossoms into a poignant family saga (in which Etaix plays both a father and his grown son) and a celebration of the circus Etaix adored. Chock-full of nimble sight gags and ingenious sound effects, Yoyo is very sweet, a little bit melancholy, and wholly imaginative.

Pierre Étaix co-directed one of Jacques Tati’s great hits, “Mon Oncle” and many folks think his style is very close to Tati’s–which it is.